Getting yourself back on track might be simpler than you think.

We've all been there. You're lying in bed browsing Instagram, when all of a sudden a notification pokes its way into view from the top of your screen.

"Time for your daily Italian lesson. Take 5 minutes to now to complete it."

You're conflicted. On one hand, it's already 11 PM. You should probably sleep. On the other hand, you have a nearly week-long Duolingo streak going. You'd hate to break it now.

Nevertheless, 11 PM is far too late to begin doing chores, so you decide to just start over tomorrow and power down your phone.

There's no hiding it: learning is... well, boring.

That is, most of it the time. It's why no kid on the planet is ever excited to race home to go do their homework. It's also why apps like Duolingo push you as hard as they do. It's therefore no surprise that user engagement and conversion has become a north star in online learning.

Engagement is what drives features like Duolingo streaks and in-app achievements. Chances are, if you aren't staying engaged with an app, then you mostly likely aren't finding enough value in what it has to offer. 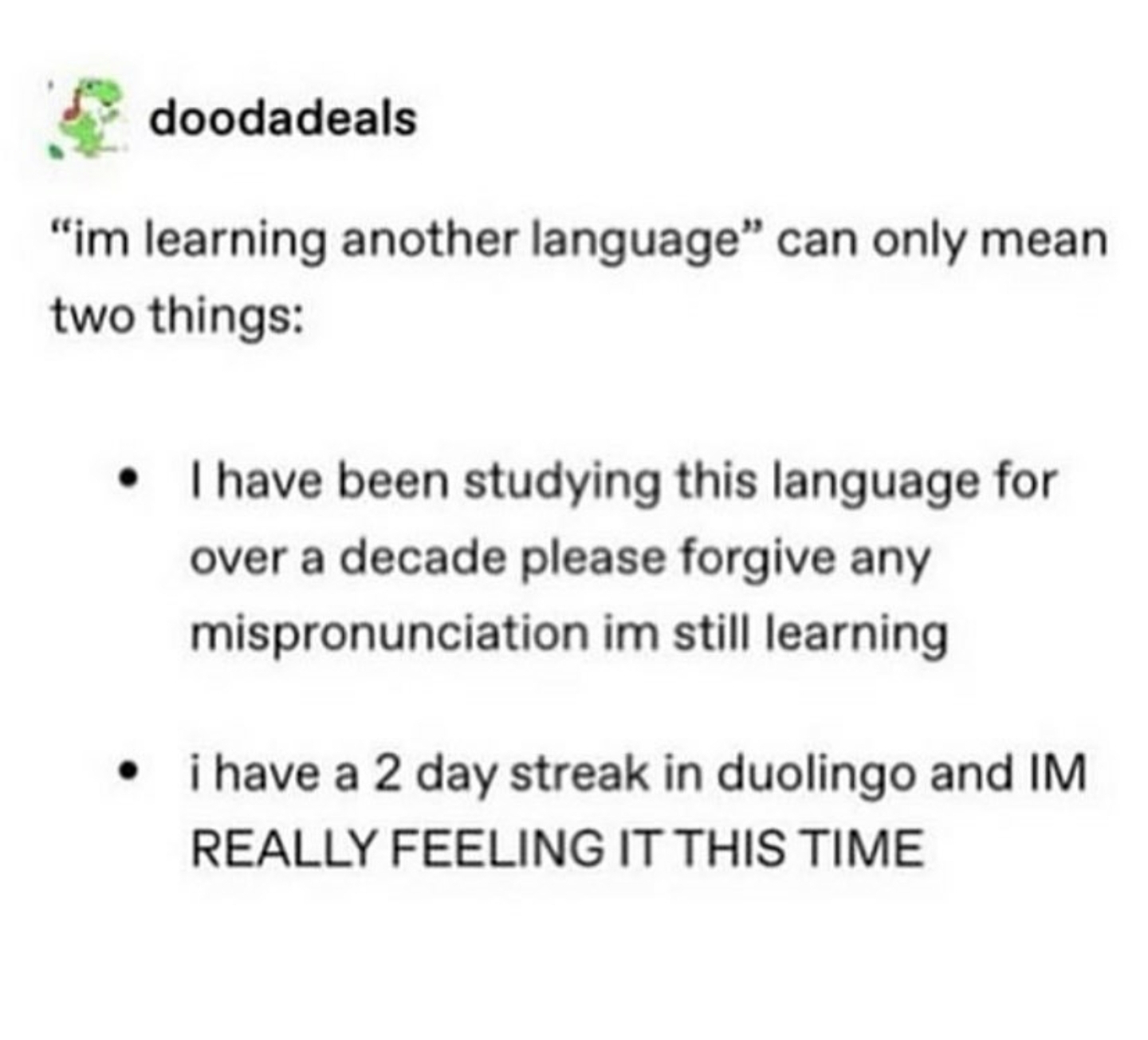 The folks over on /r/languagelearning get it.

I personally find it difficult to stay engaged with Duolingo regardless of how many notifications I receive. If you're reading this article, I'm guessing that you might feel the same.

So is everyone just lazy?

Well... yes. Sort of. I like to think of it as justified laziness.

It's always a guilty feeling pushing away that Duolingo notification. You usually end up thinking something like "What was I thinking...? I'm way too lazy to learn Japanese. Plus, I don't have the time."

People make time for the things that are worth their time. Otherwise, why dump hours of your life into anything? If you're too lazy to do a Duolingo lesson, it's usually because the reward isn't worth the time you're investing into it.

I myself love languages. Over the years, I've tried many times to learn different languages through Duolingo – Indonesian, French, Chinese, Japanese, and Korean to name a few. I gave up every single time, and my reason was very similar to that of every high schooler who has ever been forced to take a foreign language credit:

It's true. I grew up surrounded by native English speakers, so why bother learning a second language at all? I mean, I'd love to watch Narcos without English subs, or order in Chinese on my visits into Chinatown, but diving head-first from Duolingo into a real-world situation like requires a bit more... for most people, at least. It's like wanting to be a fantastic singer without necessarily doing it for a living... something cool you can show off once in awhile.

Sadly, unlike singing, staying proficient in a language is much, much harder. Depending on the language, there can be dozens of components to attaining fluency... pronunciation, grammar, spelling, listening, reading, slang, honorifics, colloquialisms, recognizing accents, knowing when and how to conjugate verbs... the list goes on. With singing, you can practice alone every night to avoid getting rusty, maybe even belt out a few of your favorite cover songs. 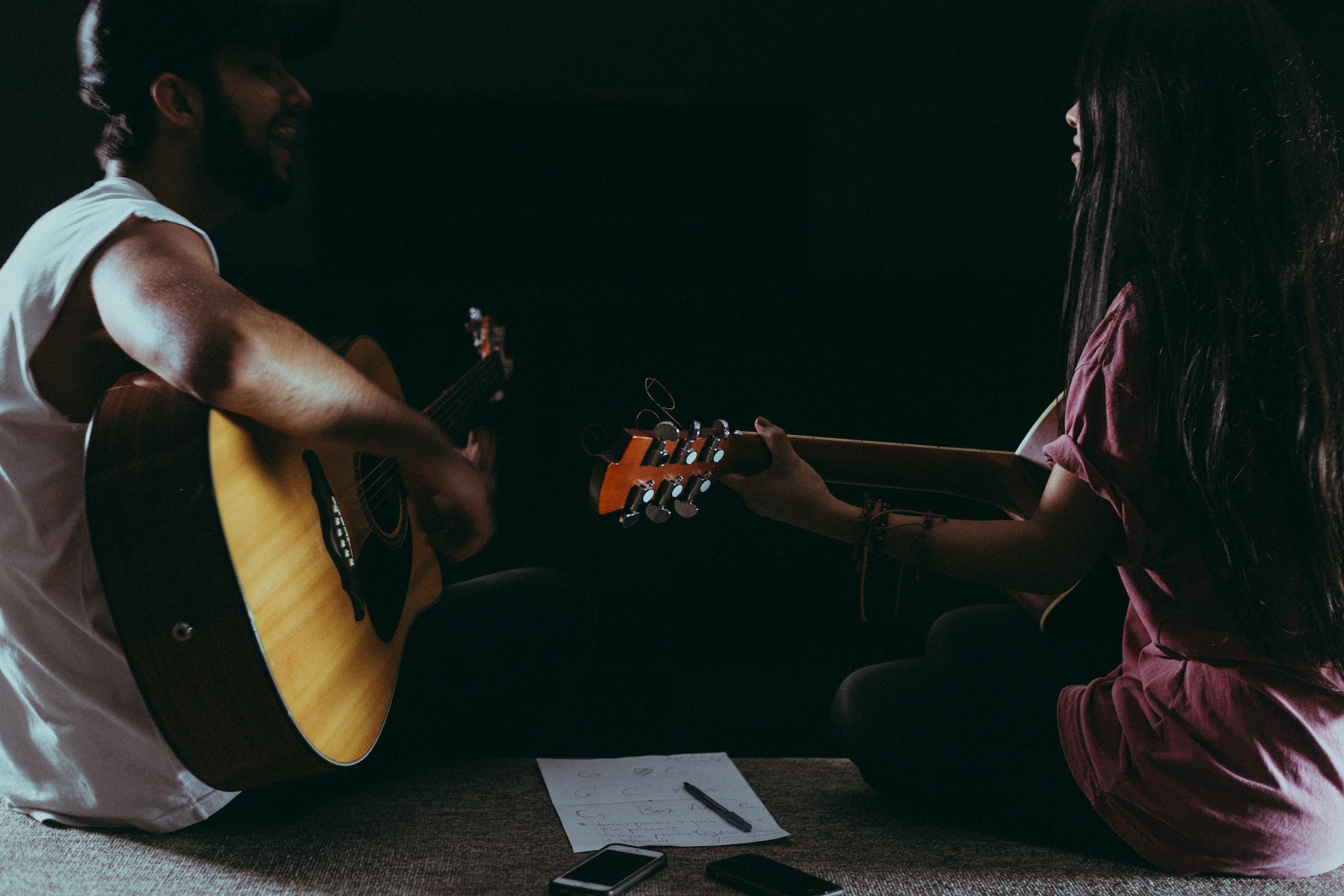 It's usually easier to find other people to sing with than it is finding a language partner.

With languages, staying proficient is not nearly as fun.

Which brings us back to Duolingo. To avoid getting rusty, apps like Duolingo push you to engage in constant review. To be perfectly honest, reviewing what you've learned is important. Relentlessly drilling you on vocabulary will ensure you remember it, at least in the short term.

However, as previously mentioned, I think we can both agree that studying like that is a drag, and more importantly, doesn't address the question:

As much as I hate to say it... this question is very much up to you to answer. The reason anyone becomes good at anything is by doing it. Not by studying the theory of it, but by actually doing it. Jimi Hendrix didn't become famous by studying music theory while never actually touching a guitar. So the real reason Duolingo's lessons aren't sticking isn't that you're dumb, or because you're lazy, but because you don't have the very real outlet you need to apply what you've learned.

You may have already tried apps like HelloTalk or Tandem, or maybe you've booked a few 1:1 lessons with a native speaker... if you have, good for you for taking your learning seriously! If it's working for you, fantastic. Keep it up.

If you've tried all of this and are still wanting more or things haven't exactly worked out, here's what can help:

Overall, Duolingo helps you learn some things, but it's all about going out there and actually speaking the language that is going to make or break your language learning journey, so the only thing left to do is get out there... and do it :)

Download for free today.
Who We Are
Get in Touch
Legal
Copyright 2021 Linguistic LLC